Since digitalized braille texts tend to take up much more space than non-braille texts, it can be a good idea to convert documents into non-braille when a lot of data needs to be stored.

In 1984, a braille reading tablet was developed by researchers at TU Delft. This tablet used a reading head fitted with photosensitive cells to capture braille text line-by-line. The reading head would be moved along a set of rulers.

In 1988, researchers at Lille University of Science and Technology published the Lectobraille, an algorithm capable of converting braille documents to non-braille. With this solution, the braille document is photographed with a low-resolution CCD camera, before spatial filtering techniqies are employed, combined with media filtering, erosion and dilation. Once the braille characters have bee extracted, they are converted into non-braille using adaptive recognition.

The first version of Lectobraille could process one line in seven seconds, with an everage error rate of 1 percent.

In 1993, Belgian researchers launched a system for recognizing braille that had been scanned with a commercially available scanner. Regretably, this system had serious problems when it came to coping with deformities in the braille grid. Therefore, only well-formed braille documents could be properly converted. 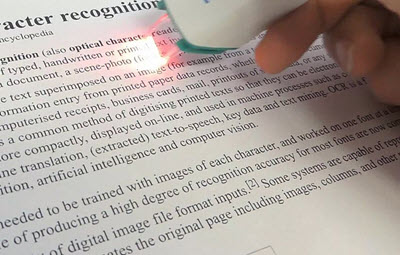 In 1999, Hong Kong researchers launched a braille recognition technique based on edge detection. This system can convert braille into both English and Chinese text.

In 2001, researchers at Curting University created a handheld device for braille recognition. This device would scan small individual sections of the braille document, making grid deformation less of a problem. Also, a less complex and more efficient algorithm could be used for the conversion.

The scanner could capture embossed Braille, in real time, via linear 128-pixel CCD array. A Texas Instruments digital signal processor would then do the recognition processing.

The device was developed in conjunction with the Association for the Blind (WA), Australia.

In 2003, researchers at the Institute for Electronic Circuits created a system capable of recognizing braille characters using hybrid artificial neural networks. One majorit benefit of this system was its great capacity for handling image degredation and dynamically adapting its analysis to factors such as input pattern.

The system uses a commercially available flatbed scanner to make a grayscale image of the braille document. From this grayscale document, the characters are then recognized using a combination of methods from the fields of image processing, image analysis and AI.