Launched in 2004, RoboBraille is a web and email service capable of converting documents into formats such as Braille, Daisy and MP3. RoboBraille can even convert images into formats accessible for the blind and visually impaired.

Translation to and from contracted and uncontracted Braille.

Many different languages are available, of which most are European languages.

All supported document types can be converted into MP3-files.

Certain files, including well-structured Word documents, can be converted into Daisy Talking Books.

The audio services are available in many different languages, of which a majority are European.

Many otherwise inaccessible documents – such as image files in jpg, gif, jpx, tiff or image-only pdf format – can be converted by RoboBraille. The list of document formats that can be converted is very long and includes most things that you will come across online.

Examples of formats that RoboBraille can convert from: 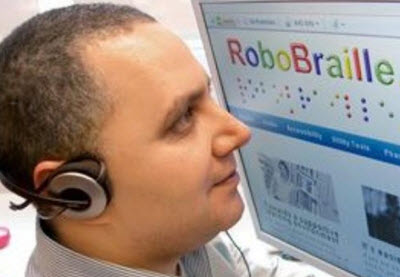 RoboBraille was created in Denmark by alternate media specialist Svend Thougaard and Lars Ballieu Christensen, who is a computer scientist and social entrepreneur.

The two inventors received a lot of support from the Danish Sensus ApS, The National Danish Center for Visual Impairment for Children and Youth, and The Royal National College for the Blind in Hereford, United Kingdom. They also received funding from the Danish Government, the European Commission and several private charitable foundations.

Examples of organisations that contributed to the development of RoboBraille:

RoboBraille has recieved many awards. There are a few examples: