A braille embosser is an impact printer used to create tactile braille script.

Braille embossers typically use special braille paper, which is thicker than normal printing paper. If you want a braille embosser capable of using many different types of paper, expect to pay extra for that feature.

Braille embossers can be one-sided or two-sided. With two-sided embossing, it is important to line up the dots so they don’t overlap.

Some braille embossers are intended for consumers while others are for large-scale professional use. On the consumer market, low-end models can be purchased for approximately 2,000 USD or less.

Just like professional ink printers, professional braille embossers can be both large and expensive, and have a significant output per hour. There is for instance the NV Interpoint 55 which can output up to 8000 braille characters per second.

Since buying a high-output braille embosser is quite expensive, they are fairly rare. Smaller desktop braille embossers are much more common, not just among individual owners but also in libraries, universities, centres for special education, and similar.

Today, software is available that can translate a non-braille document into braille and give the braille embosser instructions. A visually impaired user will utilise this software with the help of a braille display or screen reader software.

Special keyboard drivers are available that will let the writer use the six keys s-d-f-j-k-l on a non-braille keyboard as a braille entry device.

Two side knobs are used to move the paper through the machine, and the rollers that hold and advance the paper have grooves in them to avoid damaging the braille dots.

The Perkins Brailler became available in the early 1950s after being invented at the Perkins School for the Blind in Watertown, Massachusetts, USA. Gabriel Farrell, the director of the school, wanted a machine that would make it easier for his students to write braille. Also, it needed to be both inexpensive to make and reliable to use. Farrell asked David Abraham, a woodworking teacher at Perkins, if he could come up with a solution, and they also involved the mathematics teacher Edward Waterhouse in the process. The result was the Perkins Brailler.

A new version of the Perkins Brailler was launched in 2008. This version is less heavy and less noisy, and it comes with an erase key and an integrated carrying handle.

This version of the Perkins Brailler, designed by David S. Morgan, was released in the early 2010s.

This Brailler is based on the mechanical action of the classic Perkins Brailler, but also feature modern computer-based solutions that require electricity, sensors and a speaker. The sensors capture the mechanical motion of the embosser, making it possible for the device to provide a text-to-speech audio feedback. Software is available for multi-lingual speech and Braille support, including major languages such as English, French, German, Russian, Arabic, and more.

When the device doesn’t have access to electricity, the SMART Brailler can be used just like a normal non-electric Perkins Brailler.

The Mountbatten Brailler use the traditional typewriter keyboard that we are familiar with from the Perkins Brailler and combines it with modern tech solutions. In this way, it reminds us of the SMART Brailler described above, but the Mountbatten is considerably older – it was first released in 1991. 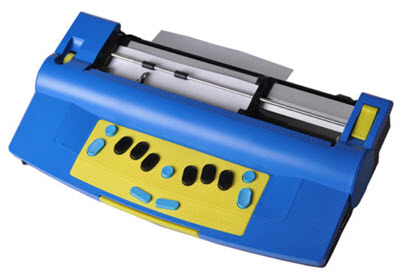 Today, several models of the Mountbatten Brailler are available, including:

The Mountbatten Brailler was created by Ernest Bate at the United Kingdom’s Royal National College for the Blind (located in Hereford, England). It is named after Lord Mountbatten (Louis Mountbatten, 1st Earl Mountbatten of Burma) who left a bequest in his will for the development of a modern, portable and inexpensive brailler.

Initially, the Mountbatten Brailler was manufactured in Australia, but in 2010 the production moved to Poland.

For information about Braigo, see separate article on this site.