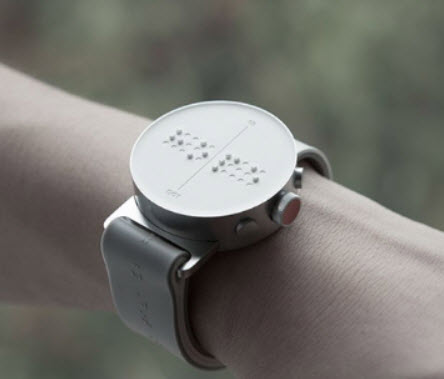 A braille watch is a watch (timepiece) where time is displayed in braille. When you touch the dial, you can feel the embossments.

Classic analogue braille watches will typically have a protective glass or crystal cover over the display, and you need to flip this cover open to be able to touch the embossments and the clock-hands. The clock-hands are constructed in a way that makes it difficult to accidentally change their position.

Nowadays, braille watches are facing competition from watches that will say what time it is (aloud) at the touch of a button.

Braille notetakes are portable electronic devices where you use a keyboard to take notes in braille. The 6-key layout well known form the Perkins Brailler is standard.

The notetaker can output in synthesised speech and/or have a refreshable braille display. The braille display rely on tiny metal or plastic pins, and will require recurring professional cleaning.

Braille notetakers will often include additional features, such as calculator and address book.

Many Braille notetakers have Windows as their operative system. 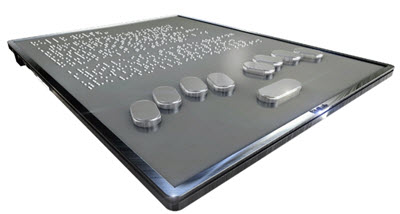 Blitab is an Android tablet combined with a smart Braille surface. Blitab is not the only device of this type, but it has become one of the most well-known ones since it is comparatively affordable.

How does it work?

You press a button the side of your Blitab, and the top half of the device will become a braille reader. This means that you can load non-braille content (a web page, a document, etc) and then read the content in braille. The braille-part of the Blitab rely on small bubbles that can change very quickly.

Since Blitab is an Android tablet, it comes with a lot of handy features such as Wi-Fi connectivity and Bluetooth, and the user can download and use Android apps.

There are a large selection of apps available for the Blitab.   Not all Android apps will work on your Blitap but there is a large selection of apps that will.  Examples of apps that works with Blitap includes Evernote,  Facebook, Messenger, Ike to do list, IQ option trading app, Robinhood trading app and many more.  You can find an app that can help you do almost anything.

There are plenty of Android features that are useful for the visually impaired, such as voice over.